What is Behind the Dwight Ball “Resign Sign” Campaign? 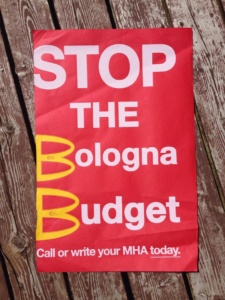 Although social media is a proven tool for organizing during modern protests, the traditional “boots on the ground” strategies of conveying a movement’s message continue to be effective in making a town talk.

Newfoundland & Labrador has been feeling a tremendous buzz of unrest with voices, such as the #NLRising movement, rapidly emerging from province-wide dissatisfaction and anger towards Premier Dwight Ball’s Liberal leadership.

In addition to the various protests and demonstrations spawned as widespread backlash to the government’s controversial austerity budget in April, the strengthening voice of concern has recently zeroed in on Ball himself. These anxieties come in the wake of an in-the-millions severance scandal involving NALCOR Energy’s former CEO Ed Martin. The tone of discontent has taken a shift from disgruntled criticisms of Ball in light of his budget, to a stern demand for his immediate resignation as Premier of Newfoundland & Labrador. 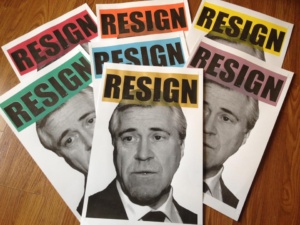 This shift in tone has been shared throughout the province with the colorful accompaniment of a new poster campaign that has been increasingly attracting attention and turning heads.

Social media and local news outlets began popping off this weekend as the capital city awoke to some new eye catching pole decor. The new poster campaign, which has been dubbed the “Resign Sign” by some, features an image of Premier Dwight Ball’s mug, with a one-word caption that reads as more of a demand than a suggestion.

The large presence of the poster, specifically on the Parkway alongside the Confederation Building, has inevitably become a reported hot topic. But the suggestion that this is “an anonymous campaign” as initially claimed in some local media outlets is not quite accurate.

“Basically it’s a grassroots postering campaign that started after the budget dropped” says Pink Eye Print Company‘s co-operater Jon Keefe, the hands-on screenprinter behind the designs. “There’s been over 2000 posters put up so far, about $900 in donations, strangers e-mailing money and other strangers coming to pick up posters.”

The various posters, placards and protest signs have been hitting the road province wide, and the “Resign Design” is only the latest in the festooned fight to #SackBall. Keefe says the posters have made their way “as far away as Corner Brook, and all over the Avalon.”

A far cry from an anonymous initiative, the poster campaign is a collaborative effort involving Coordinated Approach Newfoundland & Labrador and the #NLRising movement. Coordinated Approach is described as a “grassroots group aiming to play the role of a neutral networking base that can offer guidance and resources to activists across the province.” #NLRising, the other half of this collaboration, is a collective banner used to organize the various budget protests and demonstrations.

The postering campaign is eagerly open to involvement from the community in the form of volunteers or donations.

“People can donate by e-transferring money to dropdwightball at gmail.com” says Keefe, “And even more importantly, we’re constantly looking for people to help poster.”

“Volunteers get to keep a copy of whatever they’re posting” says Keefe. “All hand-printed Pink Eye originals.”

The “Resign Signs” have been garnering the attention of more than just the media, as protester Michael Collins found out on Saturday when he was approached by the Royal Newfoundland Constabulary while putting up posters.

“We were minding our own business putting up the Dwight resign signs behind the confederation building, and the RNC came by while we were walking and said they had a complaint from someone” says Collins, “When we asked about the complaint or what the complaint was, he said he didn’t even know himself, and was just making sure the signs never mentioned anything derogatory”.

“We showed him a sign and he was good with that, we finished up putting up the signs and then we drove through the confederation building parking lot” recalls Collins. “Next thing you know, the same police officer was behind us with the lights flashing. He pulled us over and that’s when I started recording just to document why we were being hauled over.

“It seems like it was for a possible city bylaw violation that wouldn’t be enforced by the RNC anyway.”

Michael Collins posted a video to facebook of his interaction with the RNC.

Many have since been researching the city bylaws, but an exact violation has yet to be identified. Secret East reached out to the City of St. John’s on Monday morning, however we have yet to receive a response.

By Monday morning it appeared the bylaw was irrelevant in triggering a response to the postering operation, as an unidentified crew in reflective vests were photographed stripping the “Resign” posters from polls as early as 3:30AM.  The City of St. John’s denied involvement with the poster removal, though the immediate speculation was quickly confirmed that the Newfoundland & Labrador government had hired outside contractors to do the deed.

Much like many of the recently criticized moves by the Provincial government, Dwight Ball pleaded ignorant telling the media the Premier’s office was not involved with carrying out the cleanup.

Since the “Resign Signs” first reared their head this weekend, the hot button topic has made its way from the House of Assembly on Monday, to headline gold on the front page of the St. John’s Evening Telegram as “Postergate”. 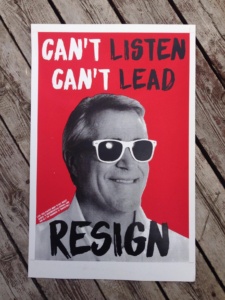 Protesters returned to the streets Monday and Tuesday with a new batch of images. The revamped second run features an undoctored picture of Premier Dwight Ball sporting a grin and a pair of shades.

A new Facebook event has also surfaced for the Provincial Day of Petition: Resignation of Ball, Bennett, Coady and Kirby on June 18th.

As the Newfoundland & Labrador government doesn’t seem eager to explain their response to the posters, or if there is even a bylaw which justifies their removal, we can safely assume that the province has not seen the last of the “Resign” designs. So while the Ball administration clambers to regain the trust of the electorate and more political actions are taken by grassroots organizations such as #NLRising and Coordinated Approach Newfoundland & Labrador; it seems likely that it will take more than a few strips of tape to hold up this government.

If you’re interested in volunteering or donating to the #NLRising poster campaign, you can contact dropdwightball at gmail.com

About the author Kris G. Hamlyn

One thought on “What is Behind the Dwight Ball “Resign Sign” Campaign?”